9 Things to See on Amarminoen That Might Surprise You

Even after hiking this route more times than I can count. It still took me a while to spot all these things.

Now you have the chance to cheat and spot them all on your first try. Hurray – let’s all praise the internet!

And they’re all free to enjoy (except one of them – I’ll let you guess which one).

I’ve listed the things in chronological order, so it’s easier for you to keep track while you’re on the hike.

These ones are cute.

And if you’re a guy like me prone to a little balding, you might even get a little jealous.

These Instagram-friendly cows are roaming several areas on the route. And many of the places with optional paths to take.

Do notice though, that you won’t hike on the actual roaming area when following the original route. But right next to it. Which for most people are fine, considering their horns…

While this one is very rare, it’s huge fun if you’re lucky.

And if you’re a fan of Jackass, an abandoned shopping cart will also do the trick.

My brother and I found this bike once. And we thought it deserved our full attention and love in our mobile video editing studio.

It was as comfortable as it looks. And it also generated an instant muddy camouflage. But due to the complex VFX used in the film, it’s a little hard to spot.

Either way that camouflage is a big advantage if you’re into the fine art of bird watching.

Let’s be honest… Does it really matter?

Though don’t expect the Premier League.

But if you’re hiking with someone, you still have all the options to make a bet on who scores the next goal.

A suggestion could be that the loser has to carry the other backpack(s) the rest of the +12.4 miles/+20 km or so.

Or give up their life savings.

Though betting an ice cream would be more fitting for most.

4. Watch Some Rounds of Motocross

To be able to catch this one in action, you’re trip has to be in sync with the Amager Motocross Club’s calendar.

You can follow some stairs on your left side, and get to the very front of the club. There’s also a spectator plateau stand right next to it. And the folks there are usually super friendly.

But do notice that the best seats are to be found in the last outskirt of the track, on the grass hills surrounding it. There’s also a generally good view. It’s a part of the route, so it’s a little hard to miss.

While it might take an unnatural amount of charm or negotiation skills. If you want to convince paraglider to give you their wet suit and favorite wind dragon.

You can be sure that most won’t mind having some spectators while showing off their skills on water (or in the air).

Watching these can be pretty meditative. With the possibility of making you want to join the fun.

6. Buy a Waffle Ice Cream at the Beach

Not really a thing to “see”. But I still think it deserves it’s spot on the list.

How does an ice cream after a 10.5 mile/17 km hike sound to you? Or some snacks or drinks?

This little beach bar (LocaLoco) is next to the parking close to the main paragliding spot.

Try their Danish “Gammeldags isvaffel” waffle ice cream. While I haven’t tested this on a particular version myself, it’s hard to mess up, so you’re most likely safe.

You can check their location and opening hours here.

The name of this place is Kongelundsfortet.

There are several things to have a look at. Or if you’re tired of people, there’s a convenient bunker at your disposal as well.

My personal favorite is the tower, where you can enjoy a good view of the ocean and nearby forest.

There’s also a toilet right at the entrance, for those who might need it. It’s pretty useful placed considered it’s around the middle of the route.

You can see the location and opening hours here.

Let me introduce to you, Bjarke.

He’s from a family of 10 other trolls made from recycled materials.

This troll isn’t necessarily easy to spot, since it’s hidden in the forest, though right next to the main trail.

The easiest way to spot it is that it’s surrounded by a half-circle of big stones. And there’s usually a lot of kids keeping it company.

So if you’re afraid of trolls (or kids), you might want to skip this one.

But if not, remember to check out his feet. Well, because you can…

9. The Pedestrian Crossing Made for Gooses

Due to the warmer climate, there’s an increased amount of goose habitant in Copenhagen. Since they don’t have to retreat during the winter.

And they’re so used to people at this point, that they’re named after the city (Copenhagen gooses).

The motivation behind this piece of work could have something to do with that.

“Treat others the way you want to be treated.” I guess that’s what the inventor of this magnificent piece of sign and road work must have thought.

The result is a very well worth contender as the #1 acronym in the dictionary under “foie gras”.

I’ve never seen such a sign anywhere else. It might be the only example in the world? 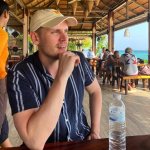 I'm the guy behind Global Dane. Everything I create is purely motivated by a passion for traveling (preferably on a lower-end budget). If using hitchhiking as the main type of transportation. Choosing the unbeaten path. Turning strangers into friends. And so on, is something that puts a smile on your face, then you’ve come to the right place. Join me on my unfiltered travels on YouTube or here on the website. And if you have something on your mind, don’t hesitate to send me a so-called electronic mail. I’m always up for a chat.

Estonia vs Latvia vs Lithuania – Which Country Should You Visit?

Why Is Copenhagen So Expensive? 13 Local Money-Saving Tips

Can You Drive From Denmark to Sweden? (Top 3 Ways to Go)

This site uses Akismet to reduce spam. Learn how your comment data is processed.